Bupaya Pagoda is located on the bank of the Irrawaddy River in Bagani, Myanmar. Bupaya pagoda is one of the most notable shrines along with the other shrines in Bagan. The name “Bupaya” is made up of two words, ‘Bu’ and ‘paya’. The word ‘bu’ in Burmese means pumpkin and gourd. The word ‘paya’ means ‘pagoda’. Therefore the name clearly communicates the structure of the pagoda and that is the pagoda has the shape of a bulbous dome and somewhat resembles the fruit of a gourd plant. This pagoda is built in a Pyu style of architecture, a descendant from the Indian style stupa. Even though the history of this pagoda is still in a mystery, many people believe that the history could be traced from the 3rd century. Thus it is believed that the pagoda was built by King Pyusawhti  who ruled Bagan during the end of 3rd century. But when looking at the style of the architecture, it seems that the pagoda dates from the 9th century, when the city of Bagan was founded. It also seems to be built in the 11th century when the city walls were built.

Legend behind the Bupaya Pagoda

According to a legend, Pyusawti was a citizen of the Bagan. When he was a young man, he managed to free the Bagan kingdom from Five Great Menaces. One of the five menaces was the extensive growth of gourd plants at the bank of Irrawaddy. When Pyusawhti managed all the menaces, as a reward he was given the hand of king's daughter. It is believed that when Pyusawhti became King, he built a pagoda at the exact location where the Bu plant was cleared. Later, he also built a pagoda in every place where he had destroyed the Menaces.

The Pagoda is built on the edge of the Irrawaddy River, a largest commercial water way of Bagan, within the walled city of Pagan, a large capital city of the Burmese Kingdom between the 11th and the 13th centuries. As with the structure of the Bupaya Pagoda, it also conforms the traditional norms set for building the pagoda. The pagoda has a massive gravity-type pyramidal profile. It was built with bricks and impressively decorated. The dome of the stupa is a bell-shaped structure which is built over diminishing terraces. The view of the pagoda when looked from the river looks like a fortress-like structure. On the top of the pagoda, there is a gilded Hti, a finial shaped as an umbrella found on almost all Burmese temples. This pagoda also enshrined Buddha's relics.

The entrance to the pagoda premises is guarded by two white and gold Chinthes, Burmese mythological lions. Alongside the Chinthes, there is a small person standing in both sides of the gate, welcoming the pilgrims and devotees. The ground also contains numerous ornate pavilions. The entrance is also beautifully decorated according to the Burmese art. In the premises, the pagoda is situated at the far left while in front of the entrance gate there is a one-story building which houses Buddha statues. The building is also decorated according to the Burmese art.

Reconstruction of Bupaya Pagoda after the 1975 earthquake

During the earthquake that occurred in 1975, the original brick structure broke up and ultimately fell into the river. The new Bupaya Pagoda was built at the same location after the earthquake. While constructing the pagoda, it was built according to the traditional plan of a polygonal base. However, the new pagoda has a concrete structure and has been completely gilded. The pagoda has become a distinct landmark on the shores of the Irrawaddy River. 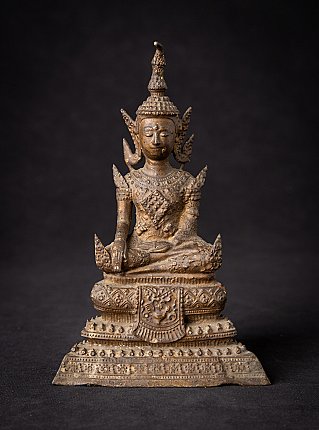 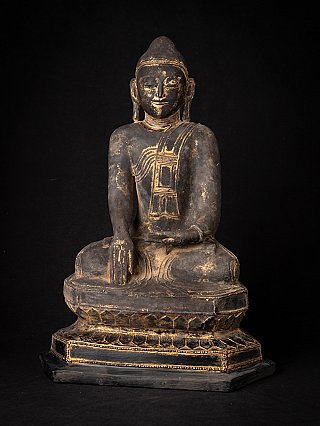