Who is Buddhist Diety Hevajra?

Buddhist deity, Hevajra is one of the main yidams in Tantric Buddhism / Vajrayana Buddhism and Nairatmya is considered as a consort of Hevajra. He is considered as the principal meditational deity of the Annuttarayoga classification in Tantric Buddhism. Newar Buddhist also regards him as belonging to the highest yoga tantra. He, in the word Hevajra, symbolizes great compassion while vajra symbolizes wisdom. Hence, the word Hevajra consists of the essence of wisdom and compassion in its entirety.

The Hevajra Tantra or a yogini tantras of the anuttarayogatantra class is believed to have originated between the late 8th and the late 9th or early 10th centuries in Eastern India. The 28th throne holder of Sakya, Jamgon Amyeshab considers the Hevajra Tantra was revealed to Virupa by the Nirmanakaya Vajranairatma. It is also believed that Nirmanakaya Vajranairatma revealed this tantra to Dombhi Heruka, Virupa's senior disciple. It is believed that through this revelation the main Sakya exegetical lineage of the Hevajra tantra descended.

In the early 11th century, Drogmi Lotsawa Shakya Yeshe journeyed from Drompa-gyang in Lhatse to Nepal and India. He also visited Vikramashila where he received instruction in the Hevajra Tantra form Santi-pa. He later visited Bengal where he received instruction in the rootless Marga pala from Prajnedraruci. This rootless Marga pala concerns with the Hevajra tantra and its commentaries.

After twelve years Drogmi Lotsawa Shakya Yeshe returned to central Tibet. He then translated the Hevajra Tantra into Tibetan and taught Dkon mchog ryal po, the founder of the Sa-skya Monastery in 1073 AD. This teaching was the beginning of the close relationship between the Sakya Order and the Hevajra Tantra.

Slowly, the Hevajra Tantra was spread around the world translating into the local languages.

View our collection of Buddha Statues in our catalog

As described in the Hevajra Tantra, the Buddhist deity Hevajra has four forms and it is similar to the forms described in Samputa Tantra.

In Buddhist arts, Kaya Hevajra is depicted in the two armed bodies or kaya, standing in an advancing posture on a multi-colored lotus, corpse, and sun disk. He is portrayed in dark blue color and holds a vajra club by his right hand. His left-hand holds a vajra-marked skull cup. On his left shoulder, a khatvanga staff is placed and is adorned with the six symbolic ornaments. He is represented embracing his consort Vajranairatma.

As described in the Hevajra Tantra, Vak Hevajra is depicted in four armed body which stands in an advancing posture on a multi-colored lotus, corpse, and sun disk. He is also depicted in dark blue and holds a vajra by his right hand and skull full of blood by his left hand. The other pair of arms embraces his consort Vajravarahi.

As mentioned in Hevajra Tantra, Citta Hevajra is portrayed as having six armed which stands in an advancing posture. His right leg extends and left one bent on a multi-colored lotus, corpse, and sun disk. He is also represented in dark blue with three faces. The color of faces differs, central one has the blue color, the right one has white color and left one has the red color. Each face has three bloodshot eyes and four bared fangs and frowns with knotted brows. His tawny hair streams up surmounted with a crossed Vajra. His two right hands hold a vajra and a knife. His two left-hand holds a trident and a bell. The remaining pair of arms embraces his consort Vajrasrinkhala. Along with Citta Hevajra and Vajrasrinkhala, nine dramatic sentiments are also included in the Buddhist arts. Citta Hevajra  is often adorned with a diadem of five dry skulls, a necklace of fifty fresh heads and the six symbolic ornaments or seals.

As mentioned in Hevjra Tantra, Hrdaya Hevajra consists of the sixteen armed, four-legged, and eight faces. He stands with two legs in Ardha-paryanka posture and the other two legs are depicted in alidha posture on a multi-colored eight-petalled lotus. Regarding his face, his central face is black, the first right one is white while the left one is red. The upper face is depicted in smoke-colored and ugly. The outer two faces on each side are black. His lustrous tawny hair streams upward crowned with a crossed vajra. He is adorned with a diadem of five dry skulls and the sixteen hands hold sixteen skull cups. The central pair of arms holds skull cup consisting of a white elephant and the yellow earth-goddess Prithvi. He also embraces his consort Vajranairatma whose two legs encircle his body. Vajranairtma's right hands hold a curved knife while the left hand is wrapped around the neck of Hevajra and holds a skull cup. Besides the central skull cup, the other seven skull cup that he holds contains a blue horse, a white-nosed ass, a redox, an ashen camel, a red human, a blue sarabha deer, and an owl or cat. Hevjra is adorned with the six symbolic ornaments. They are circlet, earrings, necklace, bracelets, girdle armlets and anklets and smeared with the ashes of the charnel ground.

View our collection of arts and statues in our gallery 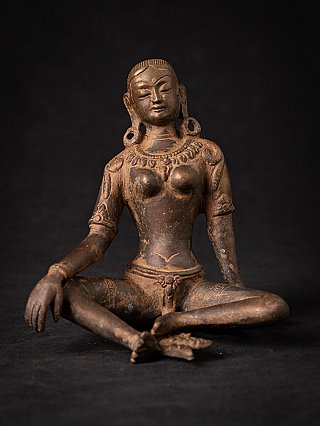